A new year and a new Subaru Outback, all new for real…

Subaru has built itself a reputation in the industry for many reasons. They made some of the best rally cars that have graced the sport giving the brand a motorsport heritage, they make some of the most reliable and incredibly balanced and stable cars giving them a strong safety record, it is one of the most successful brands commercial for having an incredibly long streak of year over year sales growth which shows they know what the customers want. This gives Subaru a solid backing and for all of this, credit goes to their research department. Subaru really cares about what their customers and potential customers want and it’s reflective in their products which is rewarded with their incredible commercial success. For the latest 6th generation of the Subaru Outback, they apparently ran the ideas for its design through potential customers which has resulted in the overall appeal of the car to be very much similar to the existing on sale Outback which shows the love people had for the Outback. 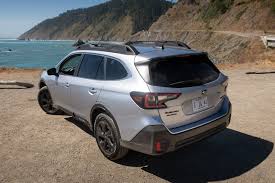 While the car looks more or less as the previous one, there have been some subtle changes but nothing groundbreaking so that might feel like a negative in general but everybody loved it before and they love it even more and it is otherwise a pretty looking car so it seems this goes in as a positive for the 2020 Subaru Outback. The real updates for this car show on the interior where quite a lot has changed. The eye grabbing focus on the new car definitely has to be the new infotainment system. It is a vertical orientation 11.6inch display which is massive and something that is unique and you wouldn’t see on many other cars which have horizontal oriented displays and are usually smaller and the display is incredibly fast and snappy thanks to two processors at work. One handles all the media requirements and the other looks after the climate control settings. While the display is a touchscreen it does get physical knobs and buttons for media controls and climate controls.
The one thing that does feel a little disturbing is the fact that even though the Outback is a crossover and sports great off-roading ability, the vehicle settings for changing modes and controlling the car are buried deep in the system which makes it cumbersome and rather odd. However it makes up for that by using brilliant tech, as it adopts the driver monitoring system from the Forester. The system can recognize upto 5 drivers using face scanning and implement settings specific to the driver such as seat positioning and preferred climate control settings which makes it quite convenient especially for those who are buying it as family car, which is the primary customer base for the Subaru Outback. 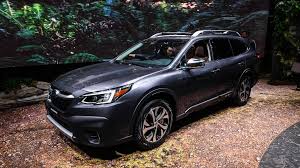 The engines on the Outback are claimed to be heavily revised by Subaru. The car comes in 2 powertrain options. The base variants are powered by a 2.5L naturally aspirated flat four boxer engine which it shares with the Subaru Forester and produces around 182 horsepower now with a peak torque of 176lb-ft. The XT trims of the Outback use the 2.4L turbocharged flat four boxer engine that it shares with the Subaru Ascent and produces a healthy 260 horsepower and a peak torque of 270lb-ft. Both the engines are mated to a CVT transmission that now mimics an 8 speed automatic compared to the 6 speed in the previous iteration of this CVT on the outgoing car. Power is pushed to all 4 wheels in the Outback as it is with every Subaru. The car isn’t particularly aggressive and the base engine might feel a little sluggish along with the not so clever gearbox and while it might be perfectly okay for a family car, it does feel there could’ve been more. The turbocharged 2.4 on the other hand does pack more punch but isn’t going to be a monumental upgrade over the base model. The engines simply lack any grunt and the gearbox might struggle to keep up with the 2.5, it does find its job made easier with the turbo unit so that might be a point to consider if you’re somebody who is concerned about the driving emotion along with getting from A to B. 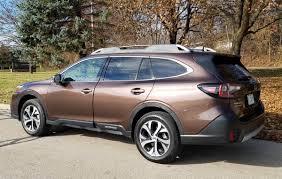 The Outback gets new suspension and roll bars that are aimed for a smoother ride and the roll bars are hollow this time to save weight. The car is built on a new platform and Subaru claims it to be about 40% stronger than the outgoing car in the scenario of collision which adds to the safety factor. The car is also longer than before which is clearly reflected in increased space for the rear seats and more storage space in the boot which will be very much appreciated in a car that is primarily used as a family estate wagon. The other personality of the Subaru Outback apart from its family friendliness is its off road ability and the car is pretty good at it. Make no mistake, this is not a rally monster like the Impreza WRX, but its not a showpiece either. It’ll take to most off roading scenarios adequately and while its not a great idea to take your new 2020 Subaru Outback on an adventure in the Amazon, it will work brilliantly in bad roads, mud and gravel and steep hills and pretty much satisfy the average customer of the car well enough which works for it. The deal with the 2020 Subaru Outback is pretty much the same as with any other major refresh for any Subaru vehicle is, the updates are not revolutionary or ground-up changes but subtle and convenient upgrades to the existing design and abilities of outgoing cars that the customers love and adore which makes it a win win situation for both the carmaker and the customer.
All in all the 2020 Subaru Outback is great, and it’ll work brilliantly for the people the car is aimed at, and to make things even better, it still undercuts most of its SUV rivals significantly at the pricing making it a great buy. The 2020 Subaru Outback will start at 27,655$.